HTTP2 Multiplexing: The devil is in the details 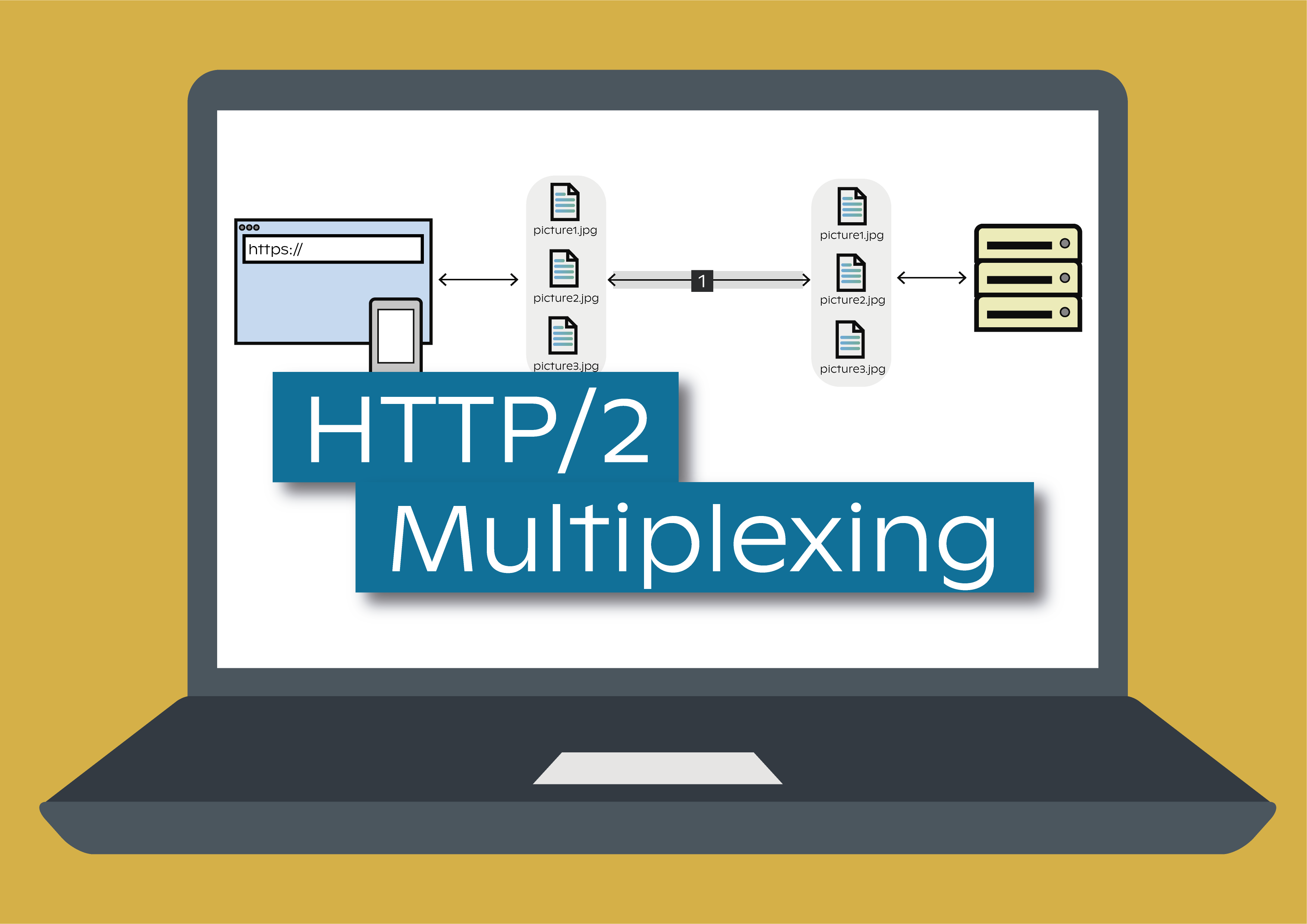 HTTP is the current de facto network protocol that supports most of the Internet. Whether we are watching a YouTube video, checking a friend's Instagram or buying that plane ticket to a conference on the other side of the world, HTTP is the protocol used by our web browsers or mobile devices to communicate with web services.

HTTP was created at the beginning of the 90s, and its first version was HTTP/0.9 (how typical of engineers, to release a beta version..!). Since then, it had 3 more major iterations or versions: HTTP/1.0, HTTP/1.1, and the latest one, HTTP/2. Currently, there is a proposal for a fifth iteration, HTTP/3, which is now on standardization stage. In a nutshell, consists of bringing HTTP over QUIC for the masses.

HTTP/2 is a protocol that was highly inspired by Google’s SPDY protocol. SPDY’s goal was to reduce the web page load time by compressing, multiplexing and prioritizing HTTP requests. Multiplexing HTTP requests allows the usage of a single connection per client, meaning that a single connection between the client and the webserver can be used to serve all requests asynchronously, enabling the webserver to use less resources, thus support more users at the same time.

Ok, all fine. But can’t I achieve a similar behavior to multiplexing with HTTP/1.1?

HTTP/1.1 client libraries can use a mechanism called connection pool, where connections can be shared. However, this is not the same as multiplexing. If multiple HTTP requests are performed in a very short span of time, HTTP/1.1 has no way to share those connections. Therefore, it will create new connections to the content server for each HTTP request.

Makes sense. By the way, how do I make sure that I am using HTTP/2 properly?

You have at least 2 ways to verify if HTTP/2 (or any HTTP version, in fact) is working as intended: either looking to your client debug tool (app or web browser) or looking at the logs of the web server. To help exemplifying this, I created an Android app to perform simple HTTP requests and an HTTP web server, based on Nginx, which will serve those HTTP requests. I decided to use an app over a web browser due to the app’s easiness to create the intended use cases.

Looking to the app side

The app uses the powerful OkHTTP library to perform the HTTP requests. This library works with all HTTP versions (currently up to HTTP/2) and, depending on the way you set it up, OkHTTP can make use of connection pooling on HTTP/1.1 or multiplexing on HTTP/2.

Using the Android Studio profiler tool, we can see how the HTTP requests are being performed. Here is an example of the four requests. 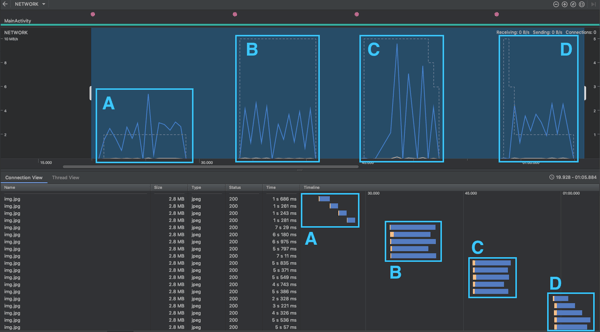 The HTTP requests are truly performed in parallel (see the waterfall). As expected, 5 TCP connections are open, given that HTTP/1.1 is not capable of performing multiple HTTP requests on the same connection (indicated on the dashed yellow line on the top time graph).

The HTTP requests behave exactly like in set B. This is expected, since we are not enabling multiplexing of multiple requests.

HTTP requests are performed in parallel, (indicated on waterfall) and the client is only using a single TCP connection (indicated on the dashed yellow line on the top time graph).

Our analysis to the client data indicates that all four sets of HTTP requests achieve very similar transfer speeds. This occurs because a single TCP connection is capable of making full use of the available channel capacity.

However, notice that the app UX is different for set A when compared to the other three sets. In the set A, the app after 1.7 seconds is capable of start showing some content to the user, which is opposite to the other sets, where the app needs to wait for some 5~7 seconds before showing any content to the user. This can be a deal breaker for apps like video streaming apps, were different requests have different priorities.

Looking to the webserver side 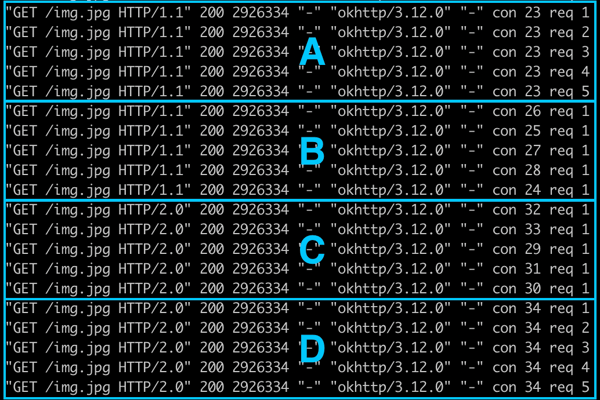 A single connection is open to the web server and all HTTP requests are performed in that connection.

As expected, each HTTP request creates a new connection to the webserver.

It behaves just like set B, where each HTTP request creates a new connection to the webserver.

A single connection is made to the web server and all HTTP requests are sharing that connection.

HTTP/2 multiplexing is a nice tool to have at our disposal. However, it is not the perfect solution to all problems. We need to fully understand the benefits and drawbacks of each approach, and it is really important to know how to measure and evaluate how each approach is working.

However, if your major concern is server resource usage, then you should prioritize approaches such as HTTP/2 multiplexing, given that they minimize the number of connections between clients and the webserver. Remember: with fewer resources used, more clients can be served at the same time.

Also, consider the effect of your request’s choices for the UX. Parallelize multiple requests may not be the best approach, and you should not use it every single time. 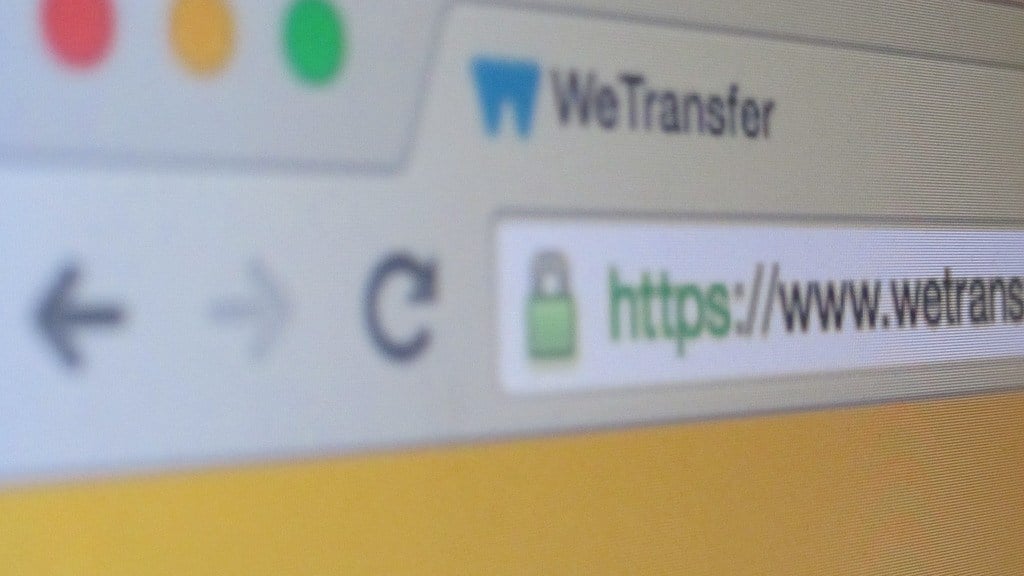